This is a recap of a successful roadtrip I made through the Northern Rockies with my wife and son over the span of about three weeks in March 2018. I used the Mountain Collective Pass (MCP) and covered 2,000 mi while resort-hopping from Salt Lake City to Calgary. We skied at eight excellent ski areas, including four I had never visited before.

Traveling from south to north, we spent a week in Utah skiing Snowbasin, Snowbird, and Alta, split two days each at Jackson Hole and Revelstoke, and finished with a week of skiing and sightseeing around the Big 3 ski areas of Lake Louise, Sunshine Banff, and Mt Norquay in Alberta, Canada. This report will include my impressions of various aspects of the ski resorts including terrain, lodging, and dining. In addition to our on-slope adventures, I'll also discuss a few off-slope diversions and some of our winter driving experiences in the Northern Rockies.

We were very fortunate to catch a nice combination of good skiing and good driving conditions throughout the trip. We traveled in a Subaru Outback with four-wheel drive, but only regular all-season tires. We skied 16 days including three or four powder days, but were able to stick to our preplanned itinerary and never had to attempt a long drive in heavy snow. My wife Kathy is a nonskier and acted as our navigator and events planner, utilizing her smart phone to scout road conditions and plan après-ski activities throughout the trip. 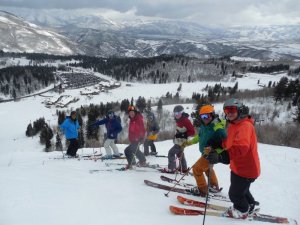 There's no cooking like home cooking. For the first week, we stayed with our son Vince at his house in the Salt Lake City suburbs. Kathy made us nice meals at night, and Ullr welcomed us at the beginning of our visit with 1 to 2 ft of fresh snow across the Wasatch. It was the week of the huge Pugski.com Gathering (75-100 individuals), and I very much enjoyed skiing with friends from all around North America for two days each at Snowbasin, Snowbird, and Alta. The new snow made ski conditions excellent everywhere we went, but especially sweet for the first two days at Snowbasin. 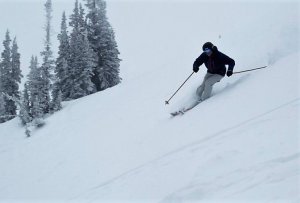 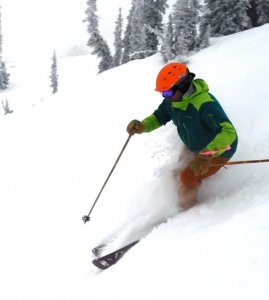 ​
@tromano at Snowbasin; photo by Jim Kenney
​
My highlights at Snowbasin were a bunch of powder runs through Easter Bowl from the 9,465-ft summit of the Allen Peak Tram, bushwhacking the steep off-piste under the John Paul Express Chair, and chasing ski buddies down the multitude of fine, long groomers served by the Needles and Strawberry gondolas, 2,310 and 2,472 ft vertical, respectively. I've become a regular at these annual gatherings of online friends, and the group dynamics are always fun and supportive. I had only two prior days at Snowbasin, and this visit featured the best conditions I had experienced there. 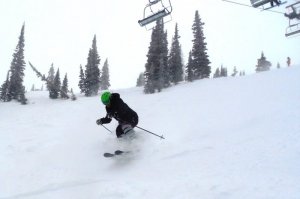 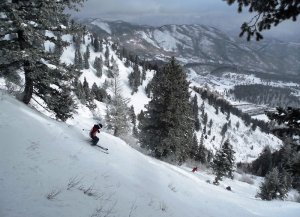 ​
@Gary Stolt off John Paul; photo by Jim Kenney​
I also spent time in the wonderful Needles, John Paul, and Earl's lodges at Snowbasin. These are three of the nicest retreats in North American ski country. The food ain't bad either! An anonymous friend of the Pugski.com community reserved a private room for the group in Earl's base lodge. It was a fantastic perk that encouraged strong rapport as participants booted up, dined, and took breaks together throughout the first two days of the Gathering. 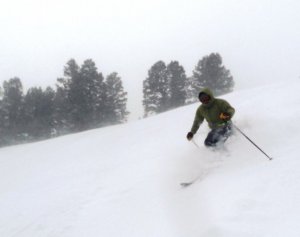 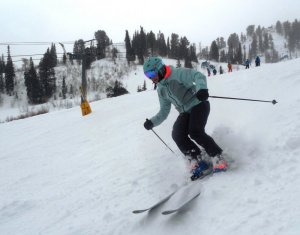 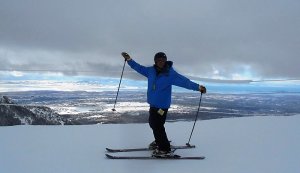 ​
@Crank and Great Salt Lake at the summit of the Strawberry Gondola: photo by Jim Kenney​

Snowbird was a blast. I've gotten to know this bodacious mountain quite well in recent years through visits to my son, who instructs there on a part-time basis. I had big fun guiding friends around the mountain in packed powder and blue sky conditions. The burly steeps of the Cirque had recovered well from an early-season snow drought. The trees under the Gad 2 chair skied great, too. 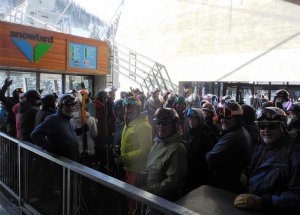 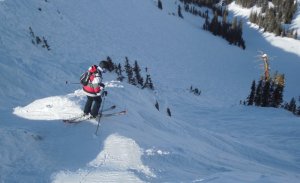 ​
Son of @LaurelHillCraze dropping into Middle Cirque; photo by Jim Kenney​
On the backside of Snowbird, Mineral Basin was in its sun-drenched glory. Hard chargers love the Cirque and other challenging frontside terrain, but older or mellower folks think they have died and gone to heaven when Mineral Basin lights up with sunshine and soft snow. We constantly bumped into Pugskiers (figuratively) all over the mountain, including group lunches at the Mid-Gad and Summit (elevation 11,000 ft) restaurants, and for après-ski socializing on the tram plaza. 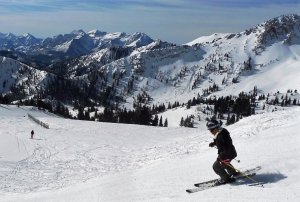 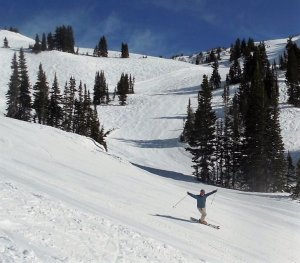 My daughter Suzy flew in from California halfway through the week, and I got to ski with her for the first time in three years. We made tracks together at both Snowbird and Alta. When the party spilled over to Alta, I enjoyed skiing the exceptionally wide range of memorable terrain there. Alta is one of those places that can be all things to all people -- just so long as you're not a snowboarder. I question the justice of excluding some from this land of plenty that includes beautiful low-angle beginner runs, undulating intermediate trails, and dramatically steep expert slopes. 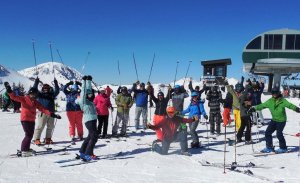 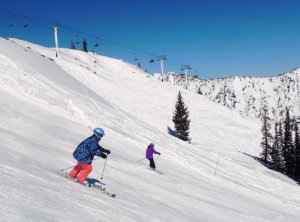 ​
@gardenmary beneath Sugarloaf lift; photo by Jim Kenney
​
I had many fun and challenging runs with a posse of friends in the Catherine's and Greeley areas. I also mixed it up by skiing great cruisers off the Sugarloaf, Sunnyside, and Supreme chairs with a coed group. There is an undeniably fine aesthetic at Alta, aided by an average of 500 beautiful inches of snow every year. 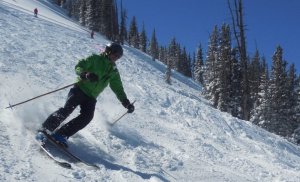 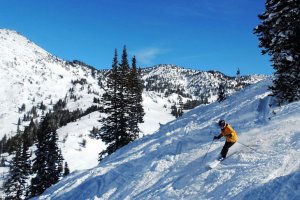 ​
@KevinF in Greeley's; photo by Jim Kenney​
It was a blast to ski three of Utah's finest mountains with friends and family. I got to ski with two of my adult children on days at Alta and Snowbird. and I went snowshoeing with my wife in Little Cottonwood Canyon. But I had an MCP burning in my pocket, and soon the Great White North beckoned. 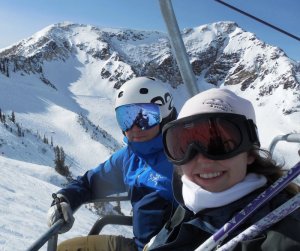 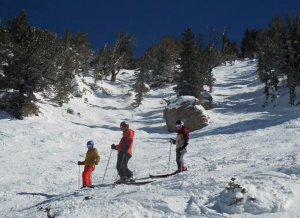 After a week in Utah, Kathy, Vince, and I drove up to Jackson, WY. The trip was uneventful on rural US-89 through a pretty, if desolate, section of western Wyoming. We did much of the drive at twilight, and the constant meandering of mule deer beside the road made me somewhat nervous. There were caution-animals-crossing signs for many miles along this route. 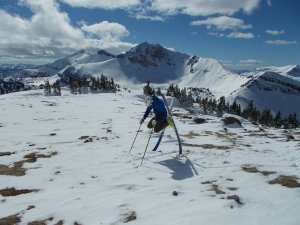 ​
Vince perched on the summit of Jackson Hole Ski Area; photo by Jim Kenney​
We had a nice two-night stay at the Snow King Resort Hotel in Jackson, including a relaxing dinner there one evening. It was weird to be slopeside and not ski the mountain at Snow King, but I was motivated to use my MCP. Vince and I took advantage of the free hotel shuttle and enjoyed two consecutive weekdays skiing at Jackson Hole. 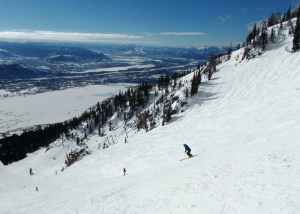 ​
Laramie Bowl at Jackson Hole; photo by Jim Kenney​
Weather conditions were the same beautiful sunshine we saw the week before in Utah. However, it was interesting how the snow differed from the consistent Utah powder/packed powder. A week of sunshine and slightly different terrain exposure will do that. At Jackson, we had to manage the sun and keep moving to appropriate parts of the mountain to make the best of each day. Jackson was busy in early March, but we never had to deal with excessive lift lines. 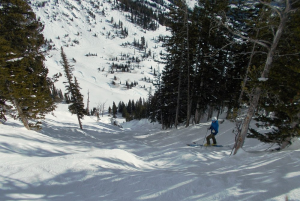 ​
Tower 3 Chute; photo by Jim Kenney​
This time at Jackson Hole, I found a nice solution for booting up in the morning at Nick Wilson's Cowboy Cafe beneath the front of the tram building; they let us stow boot bags underneath benches inside the cafe. The terrain at Jackson Hole is as good as it gets for advanced snowriders. Vince dropped Corbet's Couloir three times while we were there. I observed and photographed him and then skied around the shoulder of the mountain each time to greet him at the bottom of that run. It's impressive from all angles. 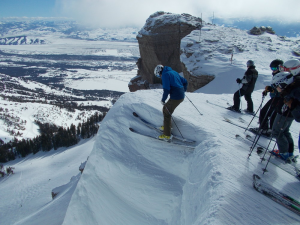 Still in the backseat

That's not me... Wish it were though!
Thread Starter
TS

ChunderBlunder said:
That's not me... Wish it were though!
Click to expand...

Oops. Sorry for my Blunder. I wonder who the mystery person is?
What is that sticker on the helmet? Kirkwood? Smartfood?

Jim Kenney said:
Oops. Sorry for my Blunder. I wonder who the mystery person is?
What is that sticker on the helmet? Kirkwood? Smartfood?

Just figured out this is son of @SpikeDog

Wow, trying to remember the day that was taken, and drawing a blank. Yup, that's my son, and the helmet sticker is MOTORHEAD. Not many people consider an Outback oilskin coat as a ski jacket.