Pacific Crest Snowcats in Tahoe is a little-known jewel, but it has been in business for 18 years. Operating off of Cabin Creek Road in Truckee on the ridges between Squaw Valley and Sugar Bowl, Pacific Crest and its highly experienced guides have access to over 3,000 acres of mouthwatering terrain.

When I arrived and parked, I met up with my host and sometimes ski partner @Rich Peters. "Happy Dave" Rintala, the owner/operator/head bottle washer arrived about 7:45, parked his rough-and-tumble Kia, and bounded out like a puppy to greet us. We immediately knew that it was going to be a killer day. Considering the minimal amount of fresh we had over the past week or so, in the back of my mind I was skeptical but thought, "We are here, we are going, let's have fun." Preparing for marginal conditions but hoping for the best, I brought along a couple of pairs of new Blizzard Rustlers, 10s for the marginal and 11s for the best. I asked Dave which I should put on the cat, he looked at me with kind of a hurt look and said, “The fat skis, dude; we are going to ski the pow out there!” And ski the pow we would.

The cat held 10 of us; five from the Reno area, one from South Lake, Rich, me, and the two guides, Dave and Abby King. I said that Pacific Crest was not well known? Well, the Reno guys were unaware of the company; the friend who was a New York City transplant had set everything up for them. 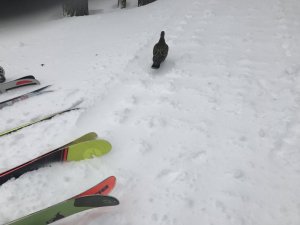 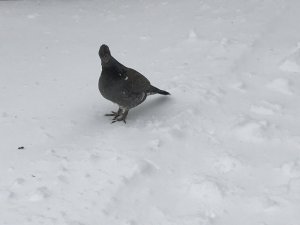 ​
If you have ever been on a cat trip, you know about going through the typical safety steps; that responsibility was delegated to Abby, a Maine transplant and first-year Tahoe skier. Abby’s background as a guide at Sugarbush and her description of what can happen in the backcountry was extremely helpful as well as sobering; she worked with all of us on the steps of using a beacon in the rare event of an accident. After taking off her teacher hat, she was our tail guide for skiing.

After the 20-minute beacon class, we clicked into our skis for a quick warm-up run. This run was on some dust on crust through the trees to the first cat point, and from there they took us to find the goods. As we went out further and further, the skiing got better and better -- and oh so better. Pacific Crest's terrain is magnificent: think of having Squaw Valley’s Granite Peak pretty much all to yourself and a handful of friends.

I won't get into a run-by-run report, but as the day progressed, the runs got steeper and more technical. Every single time, someone proclaimed, "That was the best run I ever had!” Think about that: what would you be willing to pay to say that after every run? Probably more than the cost of the full day of a cat-skiing adventure.

Speaking of which, as much fun as it was skiing down this great Tahoe terrain, riding back up had its share of adventure as well. Ward, the cat driver, had amazing skills navigating the cat back up to the peaks through riverbeds and over bridges that were designed for significantly less snow than we have had this winter. There was physically no way for them to prepare for that much snow; the cat was riding on snow twice as deep as usual, so tree trimming was an ongoing task all winter. (And I wouldn’t be surprised to hear that Ward is a rally driver in the off-season.)

The crew provides a buffet lunch, a really nice spread of cold cuts, breads, condiments, and some sweets. That said, all of us would have been just as happy with a box lunch to be eaten on one of the rides up, since spending time for lunch costs a ski run. Maybe just say, “Lunch is provided. Are there any dietary needs? We can do ham and cheese, PB&J, roast beef, or veggie." 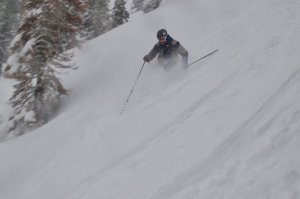 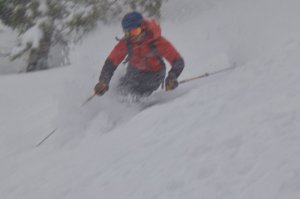 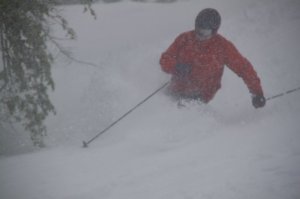 ​
I have been with numerous cat operations, and they all have their own way of doing things. Pacific Crest keeps a tighter ship than some, and I believe it is because of the risks inherent in Tahoe’s backcountry. We got in about 12,000 vertical feet, and most of our guys were satisfied with that and didn't feel shortchanged. Days after the resorts are skied out, Pacific Crest still has the goods.