I had a chance to spend some time on the Pivot Mach 5.5 a few weeks ago; next it was time to ride the Pivot Switchblade, in this case the Pro XTR 1X 27.5+ build with a price tag of $6,299. Although $6K is not in the stratosphere of pricing, it is on the mid to higher end for many. All brands offer bikes in this range, but not all feel like they are worthy of the hang tag: most are just better versions of their less-expensive counterparts. Clothes might make the man, but components don’t make the bike. Sure, they help, but the foundation is still what separates one bike from another. We tend to get hung up on numbers (bike geometry is another area where we do), but they don't always tell the difference. With its 67.25° head tube angle, the Switchblade feels a lot more relaxed steering than even the 66° of my reference Trigger. I believe it has a lot to do with the Plus 2.8” tires and the slightly stiffer 150mm Fox 36 versus the 150mm Fox 34 on the Trigger. On paper, the Switchblade looks like a Bad Trigger (if there was one), but like many things, we don’t _____ on paper. Just as with skis, the numbers do not define the bike.

Where does the Switchblade stand out? Feel. The 135mm DW-Link rear suspension, with lack of a better reference, is Stöckli-like. If there was one thing I got from this bike from the first pedal stroke, it was, “If the Switchbade were a ski, it would be a Stöckli -- specifically, a Stormrider 95.” I let @Tricia try the bike, and the first thing she said was, “This feels like a Stöckli.” Disclaimer: Stöckli does make bikes, but they were unavailable for this comparison, so I am not sure a Stöckli bike rides like a Stöckli ski, so we will just leave this comparison at that.

Back to the Switchblade and specifically its supple feel. That suppleness translated to the fastest climb (for a non-e-bike) in my reference section of Alder Creek’s Cinnamon Twist, As they say, supple is smooth and smooth is fast. Even with an almost identical wheelbase to the Trigger, it just feels smoother and more connected to the ground. But even with a slightly more upright head tube angle, the Switchblade is just not as nimble. It feels like a ski tip that had either too much rocker or too much taper: it is numb into the turns and just not as reactive as I would like. These nuanced differences are what separates one bike from another, simply due to taste and riding style. It is so subjective, and as with skis, there are fewer and fewer bad bikes (especially at this price point). It is more like, “No, that’s not what I am looking for.” There are few actually wrong bikes, because of the amount of tweaking that can be done in a multitude of ways. 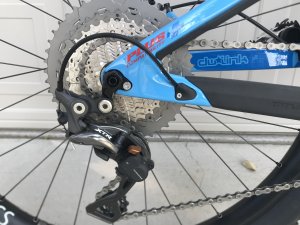 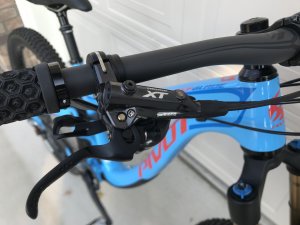 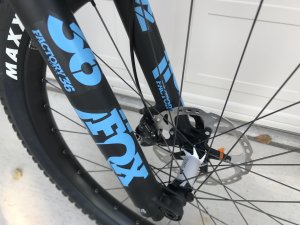 ​
I was a bit disappointed in the feel of the XT shifters. Usually there is a noticeable feel in refinement as you go up a groupo, one that is usually prevalent going from SLX to XT, but not in this case (and not specific to the Pivot but other bikes I have ridden). While the XT shifters were solid in the shifting action, they didn’t have that snick-snick feel that they did in the past: they were positive but not smooth. They have a nice tactile feel, but I actaully think the SLX shifts better. I am sure that the XT is better for long-term durability, and maybe they just need to break in.

As for how an $6K bike reacts on the trail for the average rider, well, just as an average skier can feel the difference going from a mainstream 95mm ski to that Stöckli Stormrider 95, the average rider can feel the difference in an XT/XTR build of the Switchblade. IMHO, the rider looking for that level of refinement will get their money’s worth and not regret the purchase one bit.

What can we conclude? For some readers here, I might get a head nod and a "Thanks," maybe a “That helps a lot”; from others, perhaps an eye roll and then under their breath, “Now they are experts on bike reviews and testing?” Well, to the former, I am glad we can help; to the latter, we never claimed to be experts on bikes or even in our ski gear reviews. We just want to help the average person decide what might be for them, in layman's terms. ​
Thanks to BlueZone Sports for use of the bike, which is available for demo or purchase at a demo/test bike discount at any of its locations.
If you want Pugski.com stickers, contact us!​

A good friend has been riding this bike in the 29er incarnation and is very enthusiastic. It certainly is a gorgeous bike, aesthetically.
"I have a confusion to make ..."

One of the fastest and technically talented guys I ride with rocks this bike. It is NOT a dud.

@Philpug, given what I at least perceive of your abilities and what you want out of a bike, if you're looking at Pivots, make sure and ride the new Trail 429 (if you haven't already). Fills the Goldilocks spot between a full race xc whip and the Switchblade.

Tom K. said:
One of the fastest and technically talented guys I ride with rocks this bike. It is NOT a dud.

@Philpug, given what I at least perceive of your abilities and what you want out of a bike, if you're looking at Pivots, make sure and ride the new Trail 429 (if you haven't already). Fills the Goldilocks spot between a full race xc whip and the Switchblade.
Click to expand...

Hmmm. I haven't ridden the Switchblade myself. I liked the Mach 4 27.5 standard a lot on demo. On the strength of that, and all the reviews, I demo'd a 2017 429 Trail last spring. Surprisingly it did nothing for me. Oh well. Is this year's version different?

Tony S said:
Hmmm. I haven't ridden the Switchblade myself. I liked the Mach 4 27.5 standard a lot on demo. On the strength of that, and all the reviews, I demo'd a 2017 429 Trail last spring. Surprisingly it did nothing for me. Oh well. Is this year's version different?

Yup, new bike just released. Read all about it on the link below.

But I'll never throw a leg over one, since they went with that crazy Super Boost rear hub spacing (also true of the Switchblade).

I've always been intrigued by the Intense Primer, but it has a lot of brake jack and tire clearance in back is a bit narrow. For now, I couldn't be happier with my Fuel EX 9.9. Maybe not the absolute best bike anywhere, but what an amazing range it covers. With light wheels, I'd take it endurance racing (if I weren't retired). And with beefy tires, I've taken it to Moab's roughest stuff, and loved every second of it.

The 429 was a bike I also suggested to Phil. Yeti Sb5 or @Tony S 's 4.5 would be really good options if they are available.
Enjoy Every Turn
www.steamboat.com
www.grasssticks.com. use Code REP13 for 10% off