Scott - Thanks so much for posting. Thanks thanks for fucking ruining my day - it is however a great PSA.

I'd encourage everyone on his board who sees this to post to their social. I'd encourage them to find out how to share on social with their local LE, visitors bureau, local bike shops, etc.

This story needs to be told.

I rock this bumper sticker on my vehicles. Contact Jim Moss at Recreation Law if you want one. Not sure what his stock levels are. 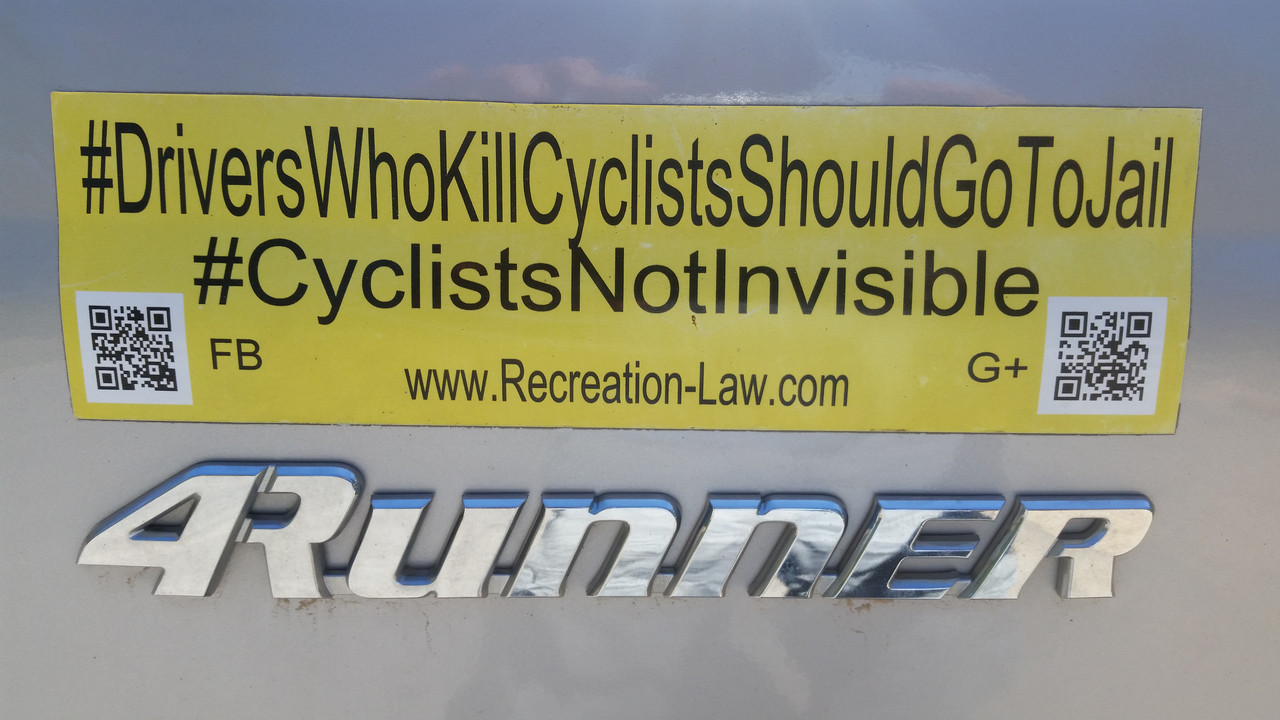 Seeing how reckless cars around around cyclists scares me and why honestly I haven't gotten into road biking. We've a lot of bikers on our windy roads, especially this time of year and I'm always, always, always careful. I slow down, move over to the other side of the road and give them plenty of room.
Find me on facebook and instagram
https://www.facebook.com/surfsnowgirl
https://www.instagram.com/surfersnowgirl/

As @scott43 knows and anyone else living in Ontario, the 1m law is in effect now. There have been some local accidents involving car and large groups. How do hit a large group of bicyclist at an intersection where you need to stop too! It makes me scared to ride on the road.

Our local bike shops all have the bumper stickers for the 1m rule. But I like that one better. Traffic signs are posted everywhere with a picture. You even have to read English!!
Yeah, I ski like girl...try to keep up!!

I don't trust anyone behind the wheel, especially a couple of feet from me at 35 mph. Why would you want to suck fumes from passing vehicles. I'v seen bike riders pull unsafe manuvers as well. Share the road.
Lay'n trenches
Thread Starter
TS

Does the injury affect the sentence? This is the motorcycle angle..

Just yesterday I was driving to pick up my son on a hilly road with no bike path. Lots of turns. Because it wasn't safe to pass, I stayed behind the guy at 15 mph or so. A truck behind me started to tailgate me. Of course I didn't give in. At some point the truck passed me at 50 mph and almost crashed an incoming car. I stayed behind the guy, not in small part to protect him from monsters like the one who had just passed me.

This guy could be my son, or my brother.

Several years back driving to the cottage NE of Orillia ON a cyclist club was holding an event. The moto was “share and safety”.

The big term here is “SHARE” which they did not. We got stuck behind them in a section of road in which passing is not allowed because sight lines are poor (double yellow line) which is fine respect the cyclists “share and safety” even though they were riding in 2 groups about 40 to 50 cyclists each, in 4 and 5 abreast, with no escort vehicles basically taking a whole lane, ok......share as a driver.....safety as a cyclist ????.

When the brief pass opportunities came (passing zones) and they were clear (no incoming cars) several of the cyclist would now ride 6 to 8 abreast completely blocking both lanes. This went on for about 15km at which point a line of cars built up behind them.

Finally I leaned on the horn at a passing zone to get by share and safety (means get the f&[email protected] out of the way in a passing zone and stop blocking you dumb asses). If I had a dash cam I would have posted the video of how to get killed on a cycle because you can’t share and follow the road rules and followed up with have dangerous charges laid against the cyclists.

I am a cyclist so I am concerned about drivers hence my wait, however, if you are going to block the cars and put yourself in danger “Darwin will eventually reward you by putting you on his list”

Drivers.....remember, the guidelines say cyclist must be given 1/2 a lane.

Cyclists.....remember for cars to share, you “MUST” follow the same rules that the cars do (this is law) to be respected. You don’t, respect and sharing goes out the window.

If sharing doesn’t happen the cyclist should remember your (cyclist) error or the drivers error........the cyclist always loses.

Little dig at bad cyclists, pedestrians are given the same rights as you, don’t forget you are now in position of the car and must follow the same rules.

Be safe, ride smart, not all drivers care! Don’t be a cyclist that causes a driver not to care by riding stupid.

scott43 said:
Does the injury affect the sentence? This is the motorcycle angle..
Click to expand...

Often times not. We had one here in VT a few years ago where a cops drunk wife ran over and killed a surgeon from UVM Medical Center and wasn't even charged.
Thread Starter
TS

Yeah, that's extreme. But..if you're riding a motorcycle and someone makes an unsafe left turn in front of you and you get clipped at 50mph, chances are you're in a life-altering circumstance. If you're in a car you probably walk away. Does the person who made the unsafe turn deserve a different sentence depending on the outcome?

As for cops..and god love the cops, I have a few in my family..but we had one here that drove into someone, got out, ran to his home and pounded vodka so there would be no way for them to prove he was DUI at the time of the accident. I mean..morality?

Bend,Or. is big on bikes. Had a intoxicated women kill a Dr. riding a bike on a backroad a few months ago. Hit & run but the cops got her. How can you be so removed from reality to operate a motor vehicle and then kill someone! The terrible things people can do.
Lay'n trenches

Pretty easy to kill someone on a bike in a car. Even easier the more of an SUV/truck etc you have. All you have to do is be changing the radio, looking at texts, over estimating your speed advantage, putting on makeup etc etc. The worst IME are those that won't respect the right of a cyclist to make a turn across the road and commit to an overtake anyway - I have to do this every day into my street and fear that I'm the buffer zone if they misjudge oncoming traffic.

I think the penalties are lenient because most people (jury, judge) can identify more with the driver. It is very easy to cause serious harm to a cyclist with a vehicle. Severe penalties are not given because the ones doling them out see how easy it would be to make the same unintentional mistake.

Add drugs to the mix, then it becomes a choice to ignore the risk and DUI.

Part of the reason motorcycles are loud is to warn cars around them. We had a project testing an electric motorcycle. The major complaint among drivers was you were silent on the highway and harder to notice. Definitely much more hazardous to operate than a gas motorcycle, not because of the bike itself, but because of how invisible you became on the road. Now think of a bike and how much smaller it is than a motorcycle. Plus it makes no loud noises and it moves slowly. And if you do run into it, it has no effect on the automobile's trajectory. Bikes are much easier to ignore.

I don't think bikers driving in groups and blocking lanes in the answer either. All that does is piss off motorists.

I would like to see a comparison of how the justice (?) system treats drivers who hit pedestrians vs. those who hit cyclists.

There is no excuse for hitting a cyclist.

I do get phenomenally annoyed at the roadies who ride several abreast, even if the road is clearly marked "single file only." I can only imagine that they develop some sort of groupthink mentality. Or maybe they figure that this way, cars have to move into the oncoming lane to pass? I've also been present at meetings for cycling clubs where they mocked another group ride for stopping at a stop sign.

None of that affects whether or not a driver should risk hitting a cyclist, duh. But I do think it contributes to a sense of justification on the part of the driver. "Well, they're not following the rules, so I'm not going to, either!" Which then extends to "all cyclists" - that pack of roadies back there wasn't following the law, so I'm going to buzz the solitary rider.

I also think that, if you don't ride on the road, you don't know how sketch it can get - for example, it seems crazy that cyclists tend to ride close to the line. But if you ride there, you quickly realize that the outermost part of the road has more debris, and that debris + narrow road tires is dangerous.

None of which excuses the behavior. Just observations about what may be going on in a driver's mind.
I reserve the right to misrepresent my level of knowledge, skill, and experience, either underrating or overrating myself, but it probably won't be on purpose. I reserve the right to contradict myself in future posts and sometimes even in the same post. I covet your skis.
F

Some pickup drivers care more about scratches on their trucks than about biker's health.

This is a sobering thread.
I tend to be careful around cyclists, but I am often surprised by them because of visibility.
The scariest area I see cyclists is on 267 between I-80 and Northstar. Its a popular place to ride but the sun in early morning hours creates a blind zone.
I'm particularly careful on that stretch, but there are motorists who can't help themselves from making crazy passes.

Then there is Mt Rose Highway with lots of blind curves.
Last edited: Jun 1, 2018
Point your skis where you want to go.
If that doesn't work, go where they're pointed.
Bob Barnes
​

There goes the whole Canadians are super polite thing.


François Pugh said:
Some pickup drivers care more about scratches on their trucks than about biker's health.

Seldomski said:
Here's the opposite: