Utah Snowed In in Alta/Snowbird

Great snow stories are like fish stories, every time you hear them the fish get's bigger the snow gets deeper …. So I am not going to start off this trip report by telling you how much fresh snow we had every morning or how epic the skiing was. Instead I am going share a picture and ask a question. Below is a picture the view from my mountain side room in Alta. We paid for a mountain view room but this is what we got … do you think we should complain ? 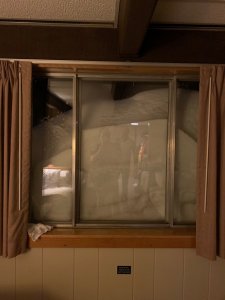 My second question is does this constitute unlawful confinement? 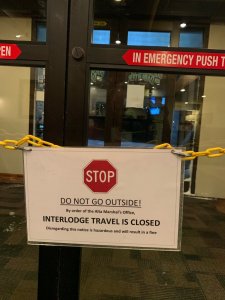 Ok joking aside this was the most snow I have ever experienced just about anywhere on any ski trip and I grew up skiing the Canadian Rockies. We were in Alta from March 7-11th and it pretty much snowed between 1-3 feet every day on days 2-4. On the Saturday it snowed so much that they shut down all the roads and implemented Interlodge locking us in our hotel overnight while they undertook massive amounts of avalanche control. Every morning we woke up to the sounds of the howitzer clearing the shoots. 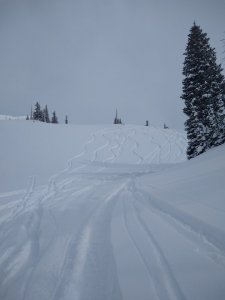 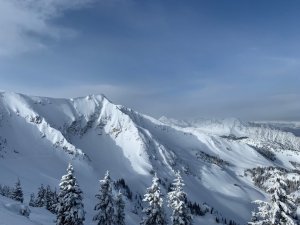 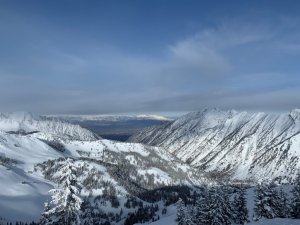 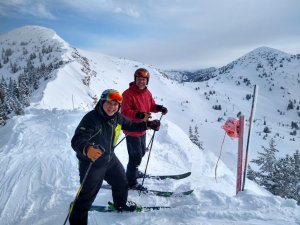 So for those of you familiar with the area we stayed at Goldminers Daughter which IMHO is the best location on the hill. Our first two days were spent skiing Alta primarily off the Supreme and Sugarloaf lifts. Shout out to John V who we saw sporting a Pugski sticker on day 1 while in line at Surgarloaf. Alta is an awesome ski area with great terrain especially if you are willing to hike a little. We really enjoyed the gladed runs off Supreme and hiked up to Catherine's a bunch to traverse over to the bowls. Because of all the snow the Baldy shoots were closed which just means we need to go back and ski them on our next trip.

We spent the next three days skiing at Snowbird which was equally spectacular. Our highlight was on Saturday afternoon when they opened mineral basing at 1 PM after exhaustive Avalanch control. We were lined up behind close to 300 people when the ski partol opened the area. It was absolute mayhem with folks racing to get first tracks and literally getting tangles in the ropes as the patrol pulled away the fence. Pretty much the entire first row of people fell in in what must have been 3-4 feet of POW with the second row literally skiing over them. In just two runs almost the entire face was skied out due to the sheer volume of people. I really wish I had filmed the stampede as it was something to see. We were smart and held back for a minute so that we could actually ski the run and it was pretty amazing.

Snowbird kept the Road to Provo closed until Monday and were there when they opened it to lay down some fresh tracks in 3 days worth of untouched POW. It was equally amazing. Given the smaller number of people there on Monday we were able to spend a good part of the day traversing farther and farther over along the Road to Provo and enjoyed at least 5 runs where we laid down fresh tracks in deep POW.

This was my first time skiing Utah and it was spectacular. This was a boys trip but I have already put in a request to book president's day weekend at GMD next year for my family as I think my kids will love Alta/Snowbird … not to mention the deserts at GMD. 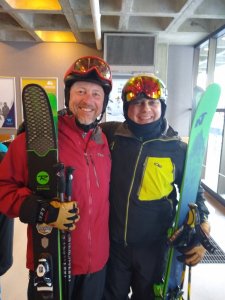 For those that are interested I filmed a little video in the tunnel from Peruvian to Mineral Basin and will upload it later if I can figure out how to do so. For those of you who have not skied Snow Bird before their is a magic carpet that you can ride in a 600 foot tunnel right through the mountain which is pretty cool. It is also a great way to access Mineral Basin without having to wait in line for the tram.

Congrats on your good luck!

Nice report @dovski! Sorry we didn't get more of a chance to talk (and I misheard your name as dbski). Friday was great at Alta and your luck in staying on the mountain paid off! We were at Solitude on Saturday, DV on Sunday and back at Alta on Monday. See you out here again some time!
Thread Starter
TS

Johnny V. said:
Nice report @dovski! Sorry we didn't get more of a chance to talk (and I misheard your name as dbski). Friday was great at Alta and your luck in staying on the mountain paid off! We were at Solitude on Saturday, DV on Sunday and back at Alta on Monday. See you out here again some time!
Click to expand...

Absolutely, we are definitely coming back. Our timing was great as we have fresh snow almost every day for 5 days straight. The whole trip was quite magical.

Overnighting up in the Canyon during big storm cycles like that is the way to go. Congrats! Love your hard charging attitude!

It can be a long night when you don't have a room and no shoes or clothes after booting up at the car, but well worth it!
Thread Starter
TS

Jim Kenney said:
Overnighting up in the Canyon during big storm cycles like that is the way to go. Congrats! Love your hard charging attitude!
Click to expand...

Interlodge was actually a great experience at GMD. Everyone in the hotel was hanging out in the saloon and we had a great time. At one point I did try to sneak outside to take some pictures but bumped into the Alta Marshal who explained to me that even though stepping outside for just a minute to grab a photo was pretty harmless, he would still give me a $1000 fine. They take Interlodge very seriously. In the morning we took the shuttle to Snowbird and the driver had to take alternate roads because a natural avalanche had come right through the main road between Alta and Snowbird. He showed us the car that got caught in that avalanche and told us about the rescue effort he helped with the previous night. It was pretty wild, luckily no one was hurt/killed but that was really just luck.

It can be a long night when you don't have a room and no shoes or clothes after booting up at the car, but well worth it!
Click to expand...

I'd like to say we were that hard core as it makes for a great story, but we are all cozy in the Goldminer's Daughter, with lots to eat and drink and plenty of warm clothes to help us weather the storm
You must log in or register to reply here.
Share:
Facebook Twitter Reddit Pinterest Tumblr WhatsApp Email Link