Yes and no. Depends.

It is usually a generous 2 hours. By which I mean you meet a few minutes early so the usual faffing around while everyone shows up doesn't eat into the ski time. And at the end they don't pull "getting back to base" time out.
And some instructors (like mine this last time) start even earlier and run a little over. My 2 hours was 2:30 to 2:45 every day.

With a competent group and line-cutting privileges you can get a surprising amount of skiing into 2 hours.
F

It depends on what level group you are in. I am doing a private ski week with my husband and instead of 6 days of 2 hours, we are doing 5 days of 2.5hrs. We rarely stop on the slope to talk so to us, 2.5hrs is a bit long so we requested to finish early.
G

Thank you all! I'll put that on my list. I heard good things about them. I like the fact it's Sun-Fri, which gives me time to get there early and adjust, ski and fly home (my trip is usually Sat-Sat).

You can connect directly to Taos from Dallas on Taos Air. No excuses!

EDIT: I see I was beaten to the punch

No... the typical ski week is a 2 hour group lesson each morning with the same instructor and group for 6 days. It costs ~$330 this season, and group size is typically from 3-7 (mine the last 3 years have been 5, 4, and 6). They do offer private ski weeks where you can book with a particular instructor for up to 5 people, for something like $1500.
J

No, ski weeks start on Sun with a ski-off. You get sorted into a class with about 5 people of the same level, who have the same instructor every morning for the week. That way you get a new group of friends and consistent instruction for the week. You get individual tips, a general tech talk at the St. Bernard on Tues evening and a video early in the week. The group votes on what they want to do - for example, my group wanted to do moguls, so that is primarily what we worked on.
Last edited: Feb 13, 2020
F 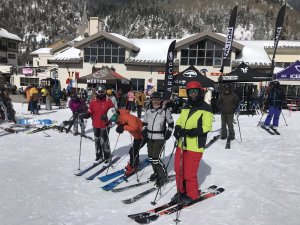 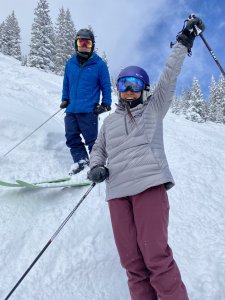 Another cross post from Ski Diva, again with bonus @KingGrump and @FlyingAce material!

Another powder day, and I’m beginning to understand why people like them. My confidence got another boost today, after a slight waning yesterday when the bumps weren’t soft.

I don’t think any new skills were introduced today, just refining what he’s already been telling us. We skied some of the fluffiest snow I've ever been in, some bump runs, and went in the trees twice. It was a super short tree run but lots of fun. The second time we each picked our own line and it was SO COOL! There’s another woman in class who is a bit more tentative in this stuff, like me, and we were really supporting each other - high fives, etc. It's been fun.

One thing Derek wanted us to do was to follow each other through the fluff, so we would all take the same line. He seriously wanted me like only a ski length behind the person in front of me. I declined - not sure enough of myself at that point and it seemed like a recipe for trouble. I must have sounded VERY firm when I said no, or my body language was yelling it, because he kind of looked up at me and then let me stay right where I was.

I also saw the instructor that I had five years ago, on our only other Taos trip. That was just a group lesson that turned out to be only me, not a ski week like this year. I went over to say hi - told him he didn’t know me but that he’d given me a lesson five years ago and it had been really helpful. I told him that we’d had a day like today, and he had promptly taken me into Etch's Glade (see profile pic at left) right after I’d told him I wasn’t sure about trees. He thought a second and then referred to Ski Diva, and asked how my neck was. So, he did remember me, because I’d had a face plant and posted about my lesson, and how my neck was going to hurt! He was super nice and thanked me for saying hi. (If you're reading this, Tom, hi again!)

I certainly hope I retain some of this stuff I’m learning. I don’t get much practice in these conditions, so it's really hard to ingrain some of these lessons. What's nice is that some of the things I’ve been working on at home have come in very handy this week, mainly all my focus on turn shape. I have skied some steep things very slowly (although the deep snow helps with that, lol). And I’ve also been able to follow someone else's tracks, which used to only work for a turn or two before I’d lose it.

Finally, he said I’m good at the carving turns when we did them. Always nice to hear, especially when the rest of the day had been hard.

Main note to self - Remember to narrow stance in the soft bumps and to stand up, because you're likely hunching.

After lunch we did some runs with the Grumps and their afternoon crew, which includes my ski week instructor. They all too my husband places that he couldn’t go by himself, and he had a great time. I would go ski a run I could handle, most definitely NOT where they were going, and then meet at the bottom.

And tomorrow we'll ski a few with FlyingAce and her husband before the magical week is over and we have to head home. Looking forward to it!
F 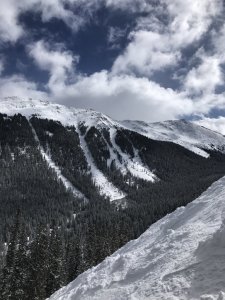 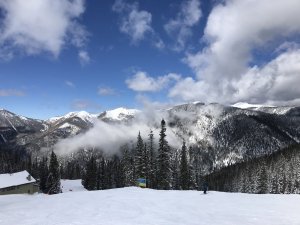 FlyingAce said:
I am doing a ski week this week, but not in Jenny’s group. My instructor is Alain Veth - I had him for Race Week last year, didn’t get enough of him, so I booked him for a week this year! We have already done more than I expected in 2 days and everything we did was in double-time. And we have not even started bumps or carving lessons yet!
I only had one photo op chance in the last 2 days after I needed time to catch my breath after a short walk. Otherwise we were all over and rarely stood around to talk.

Color me jealous. I would have loved to ski with Alain. I had the chance to chat with him for a while a couple times at his shop. I could have talked with him for hours. He's a very thoughtful, insightful, and engaging guy. I'm sure you're having the best week ever with the snow conditions and skiing with Alain.
F

Noodler said:
Color me jealous. I would have loved to ski with Alain. I had the chance to chat with him for a while a couple times at his shop. I could have talked with him for hours. He's a very thoughtful, insightful, and engaging guy. I'm sure you're having the best week ever with the snow conditions and skiing with Alain.
Click to expand...

You are right! BEST WEEK EVER!!! And oh my, skiing with Alain, just us, is a dream come true. I feel like it is a big accomplishment when I can keep up with him! I only wish we have more time or the right condition to spend a day just for carving...but we cannot let all the powder go to waste!
Btw, how’s your injury? Better? 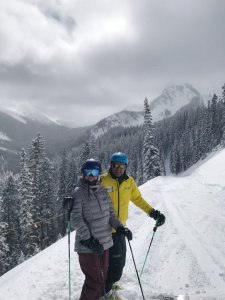 Turned out to be a beautiful, warm sunny day. Just gorgeous! We reviewed things as we skied more bumps - they stayed pretty soft, too, which was nice. Allowed me to end on a high note.

Went through the trees a couple of times again, successfully.

Skied a few runs in the afternoon with @FlyingAce and her husband. As we were riding up the lift we saw that the Kachina Peak loft was running, so Jim skied on over to do that. He was pleased to have the opportunity, as it had been closed all week.

I would love to do a ski week again. If nothing else, I got my confidence/nerve back again, and that feels pretty awesome. Now to try and retain some of the knowledge, so that I can practice when I get near bumps again. The ones at home - I dunno. Hard, icy lumps. Maybe when we’re in CO at the end of March. 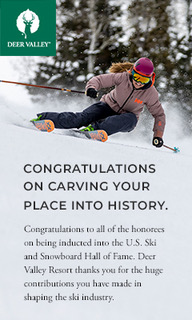