Trying to guide this process more this time.
The goal is to Describe, not Prescribe.
Eliminate the "intent"

Describe what you see going on. Describe the ski/snow interaction. Describe body performance.

Be precise including body parts, part of the turn, etc.. You don't need to break down every turn, turn by turn, rather give overall ski performance, maybe left/right differences, etc

Use what ever process works best for you. BERP, fundamentals, etc

Again NOT looking for fixes of any kind. Just trying to help some of our members to learn to "see" movements, interactions, and get better at identifying "how we move" so they can evaluate skiers better.

Just for context. Short radius turns, medium firm groomed snow. pitch is probably medium to upper blue. Skier only coming towards the camera and only a few tuns.

First full turn in video (starting at approximately 0:00.75 seconds) looking predominantly at the skis and a bit at the lower legs/knees:

A release is started by extending at the knees. 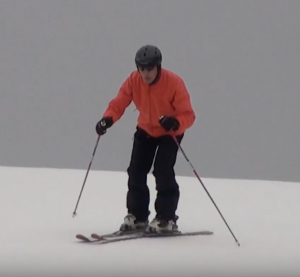 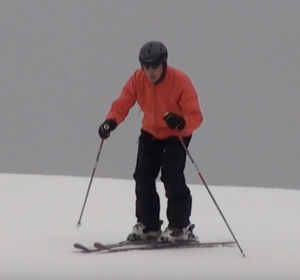 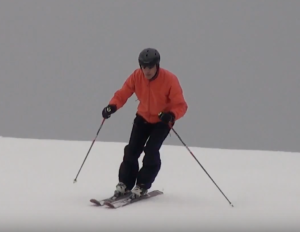 Immediately after the previous adjustment of the position of skis, we see converging ski tips in the midst of the turn. Outside (right) ski is tipped to its big toe edge without enough complimentary tipping of inside ski to its little toe edge to keep skis parallel: 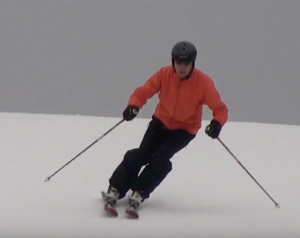 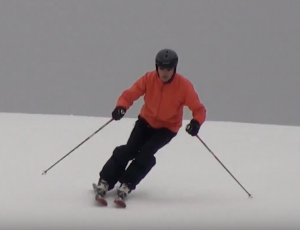 I'm going to ignore the second turn for now and maybe save it for a later post.

The third turn in the video is very similar to the first; however, it lacks some of the movement* the skier used in the first turn to bring the skis to a parallel position, so the converging skis in the midst of the turn, that was started by a wedge and then continued by lack of inside ski tipping to its little toe edge, is more apparent: *Regarding the movements and body parts: rather than get into the details of the muscles and joints employed to make the movements, I intentionally avoided those details so as not to clutter up the post. If anyone is interested in those details, please PM me for book recommendations. I have a few favorite anatomy and movement resources (both general and ski-specific) that I'd be happy to recommend.

**Sorry for alluding to a prescription. I tried to avoid prescribing fixes, but here, noting the lack of a movement seemed helpful in understanding why the skis ended up in the position in the photo.