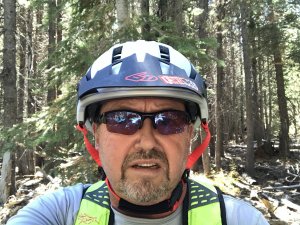 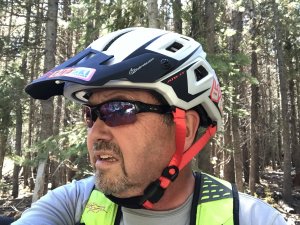 ​
The first thing I thought of when playing with the 6D ATB-1T Evo helmet was that it feels like the Volvo of bike helmets: boxy but safe. Considering Volvo’s commitment to safety, could there be a better first impression? As far as the "boxy but safe" part, the 6D is a bit larger and not as streamlined as some others, but just looking at it, you know there is something more going on. 6D’s patented Omni-Directional Suspension (ODS) stands out; even when you try the helmet on, you can feel the difference. Adjust the ponytail-compatible head cradle, clip the magnetic strap, and you will feel confident that you can take a tumble and and come out with all your marbles in place. You might think the ATB-1T feels a bit heavier than what you are used to, and at roughly 500 g, it might be. You might also notice that the double shell design and ODS connection result make it less sleek than some other helmets. But it isn't that much: comparing the ATB-1T to my current POC Trabec and Troy Lee A1 MIPS, the diameter is only about 5/8 in. different in the medium size.

Helmet companies spend their time testing the safety of helmets so we don’t have to, and I thank them for that. We can only hope that their testing is accurate and that we never have to disprove them in a real-world situation. In meeting with the 6D designer and engineer at Interbike, I have no doubt that it was 100% their intention to make the best and safest product they could. It really impressed me how serious these guys were when talking about their helmets. They focused on every feature, with no fluff or marketing buzz at all, just pure technology. Every aspect integrated into the design is pure function. Just look at the name of the model, the ATB-1T, which doesn't exactly roll off your lips. It sounds like a part number from a electrical supply warehouse. "Bob, I need 200 ft of 14g insulated wire and six ATB-1T connectors." "Sure thing, Carl. How are Mary Sue and the kids? By the way, do you need any ATC-1Ts, too?” It is that type of directness that comes from the 6D team. 6D was the "Offical Test Ride" helmet at Interbike's convention center Ebike demo
​
Every product has compromises. We have an ongoing forum discussion looking for the most breathable helmet ... well, this ain’t it. I am sure there will be a thread about the lightest helmet. [BUZZING SOUND] Again, not the ATB-1T. But when it turns to the safest helmet, the 6D will surely be in the conversation. If you think about why we wear helmets and what they are protecting, why wouldn't we give up a bit of ventilation or add a bit of weight in order to be in possibly the safest design?

interesting design! A one-year warranty does not exude confidence though.
Last edited: Oct 15, 2018
Enjoy Every Turn
www.steamboat.com
www.grasssticks.com. use Code REP13 for 10% off

I bet that was one of the most important things for you, eh?

Ron said:
interesting design! A one-year warranty does not exude confidence though.
Click to expand...

When we asked them about the warranty, the feeling I got was that they feel a lifetime warranty implies that you should wear the same helmet for a long period of time. As most of us know, helmets should be replaced regularly to assure the materials aren't compromised due to age and exposure to elements.

This past summer, I was leaving my bike bag in the car just in case I had a chance to catch a quick ride before or after working at the shop. My helmet suffered from sun exposure in the car. My bad.
Needless to say, I'm getting a new helmet.
Point your skis where you want to go.
If that doesn't work, go where they're pointed.
Bob Barnes
​
Thread Starter
TS

Ron said:
interesting design! A one-year warranty does not exude confidence though.
Click to expand...

Frankly, I have yet to see a cycling or skiing product where a manufacturer didn't stand behind a product that was truly compromised from a defect in a reasonable about of time. These industries we deal with on a day to day basis take "good will" to a new level, just look at this thread...Kastle MX84 skis delaminating.
If you want Pugski.com stickers, contact us!​
You must log in or register to reply here.
Share:
Facebook Twitter Reddit Pinterest Tumblr WhatsApp Email Link