Frankly said:
As far as photos of the actual eclipse, what is the point? You're going to find much better images from serious dedicated astrophotographers soon afterwards. It's a case of, "buy the postcard" and enjoy the experience rather than nerding out. An expensive solar filter will be worthless for another 10-80 years for most people.

I'm a professional photographer (more or less) and I'm going to take photos of what happens here on Earth with the eclipse - the way the light is, etc.

Maybe I can shoot the stampede of quickly blinded folks running amok after staring at the sun....
Click to expand... Welcome to another evening of confusion and high-frequency stimulation!
Thread Starter
TS

@SkiEssentials will be happy to know that they(once again) came through
Point your skis where you want to go.
If that doesn't work, go where they're pointed.
Bob Barnes
​
Thread Starter
TS

Phil and I drove to the parking area near the Tahoe Rim Trail to watch the eclipse.
While there I tried a few hacks, including holding the eclipse glasses up to the lens on my iPhone as well as the long range lens on my DSLR.
(all photos here are unedited)
Glasses held up to lens on iPhone Point your skis where you want to go.
If that doesn't work, go where they're pointed.
Bob Barnes
​
Thread Starter
TS

FWIW, I think people with real photography skills and real filters and such will come in with much better shots than what I took, but I'm pretty stoked that the hack worked pretty decently.
Point your skis where you want to go.
If that doesn't work, go where they're pointed.
Bob Barnes
​

I've done that ^^^ with sunglasses for the lighting effect of rose colored glasses. The effect worked, but didn't really improve the image.
If I ask questions, it is because I seek clarity, not argument.
Thread Starter
TS

For me, I didn't want to invest in the proper lens filter for one short event in my life, because I'll likely have a different camera by the time we see the next eclipse.
I took the camera with me to view, thinking that I'd take some random shots of things happening during the eclipse.
As much as our cell phone cameras have improved, its clear that the DSLR did a better job, especially with that lens.
Point your skis where you want to go.
If that doesn't work, go where they're pointed.
Bob Barnes
​

So cool! Do you mind if we share your photo on social media?

SkiEssentials said:
So cool! Do you mind if we share your photo on social media?
Click to expand... SkiEssentials said:
So cool! Do you mind if we share your photo on social media?
Click to expand...

Sure
Welcome to another evening of confusion and high-frequency stimulation!
Thread Starter
TS

Incredible!
Point your skis where you want to go.
If that doesn't work, go where they're pointed.
Bob Barnes
​
A

I'm surprised on how easy it is to get some decent pictures of the partials. There's no drastic change of light. No taking off and putting on filter in a hurry. 3 hours is a long time to get things dialed to eventually end up with some half decent pictures.

Also took some pictures of the crowd looking at the sky with funny looking glasses on.

Yeah when the eclipse was behind clouds it was almost visible with the naked eye, I just glanced and also just shot handheld very quickly so nothing got fried.

My photos of the total eclipse were pretty crappy. Not sure if I could've done better with the camera I had, but the sun's corona was still too bright. It overwhelmed the picture. I even had a nice little pine tree in the foreground (top of White Pine Ski area near Pinedale, WY). I rode the lift up and walked down.

Hmm...well, over a month later, I regret that I haven't had time to enjoy the fine company of the Pugski community--and that I missed this thread. Being (at least theoretically, barring some weird event like a total eclipse or something) a half-day's drive from Casper, Wyoming, and having my brother and my 9 y.o. niece visiting from Maine, we decided to go up to see the eclipse. We got a few pairs of eclipse glasses, long before the rush shot prices over the moon. But I wanted to see if I could get some photographs.

By the time I started looking into it, a 4"x4" square of solar filter film was going for a hundred dollars or more, if you could find it at all. All the information available repeated basically what has been repeated here (funny thing, that)--that you should NEVER try to use anything but a bona fide real solar filter, lest you destroy your camera sensor and your eyes and burn a hole through your lens. As usual, I didn't believe it. After all, it's not like we never take pictures with the sun in the viewfinder anyway--how hard could it be?!

I stacked three neutral density filters and a polarizer for a total of approximately 17 stops of light reduction--which is about what a "real" solar filter does. I was concerned about two things--first, that they might not block the UV light sufficiently, although I expected they probably would, and second that all that glass would degrade the image too much. But I thought I'd give it a try anyway. I did use the electronic screen, rather than the optical viewfinder, to make sure it couldn't damage my eyes either way.

Turns out that much of the information on the Internet is wrong! I know, hard to believe. Turns out, it worked fine, with no damage to the camera or to me or any bystanders. Here's the result (yes, with a little help from Illustrator and Photoshop):

Worth the effort, I think! And it really wasn't that much effort. I just put the camera on a tripod, and every few minutes, as the moon slowly moved across the sun, I centered the sun in the screen and took a picture. Exposure is almost meaningless, since there is no visible detail on the sun at this stage, whatsoever--just need to capture the shape. The moment the totality began, I pulled the filters off and shot the images of the corona. Because I used a remote shutter release, I didn't have to do much other than push the button, so it did not detract from my own amazement at the spectacle. 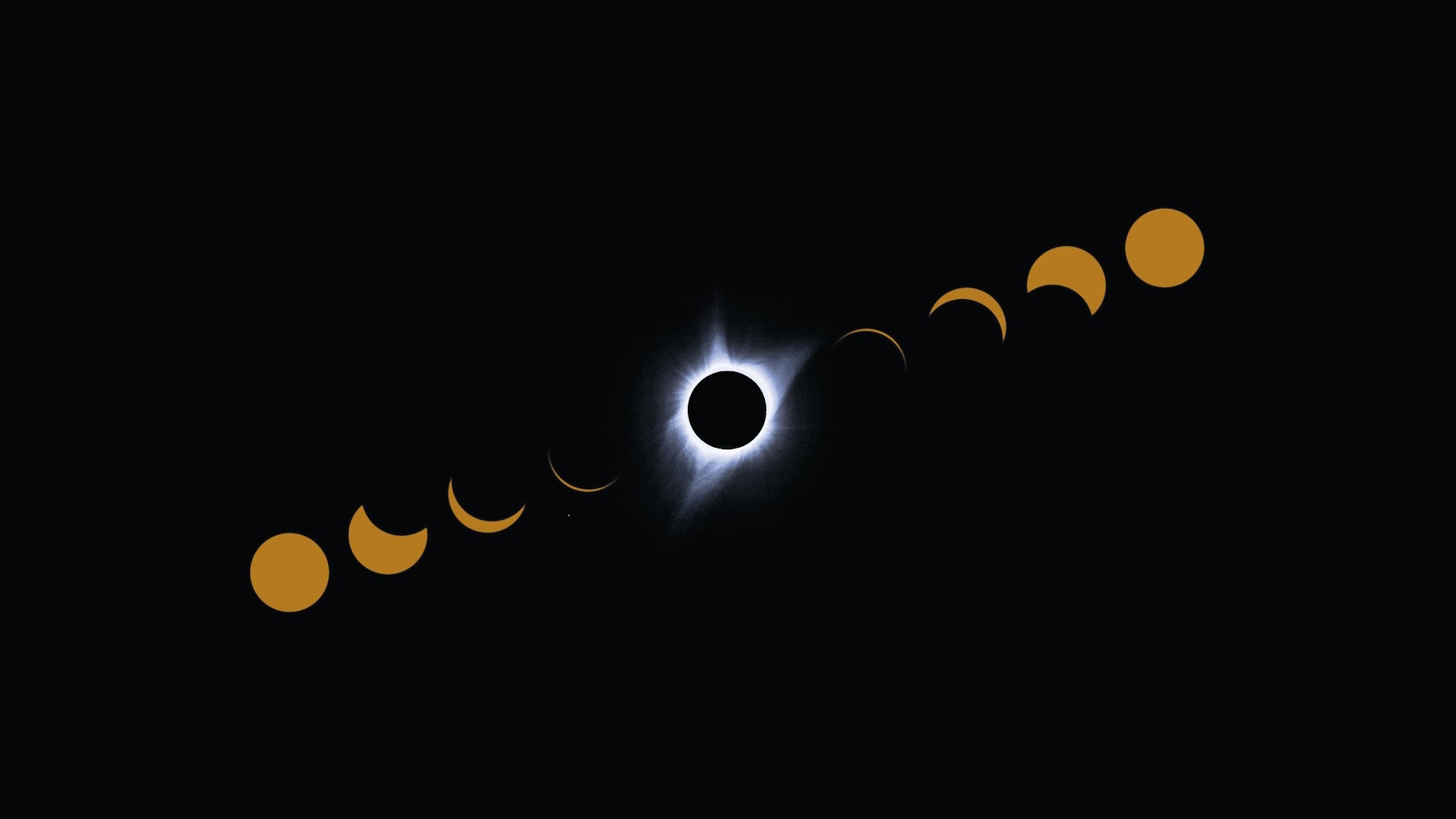 It was worth the trip! It took two days to get back to Aspen, with the traffic, so it was a lot of driving for a couple minutes of darkness. But it was truly amazing. I'll never forget!