Shrink It and Pink It: What Makes a Woman's Ski Different?

So what is it that makes a woman’s ski, a woman's ski? 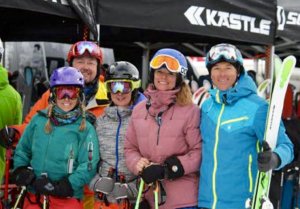 Every season Tricia and our women testers get on 50 to 75 pairs of women's skis. Our three main female testers are small, medium, and tall; they are proficient skiers with different needs and desires in the ways that skis perform. SkiNurse at 4’13½” is lighter on her skis and can have a tough time demoing because her size is often unavailable; such sizes need the most refinement and tweaking in order to scale the core and flex for lighter skiers, so they are usually the last to get produced. SBrown, at 5'9" our tallest tester, can run into a similar (but opposite) problem because the longest length in the women's models is also often unavailable. At least she can test the skis that are unisex in construction because the only difference is the topsheet. Tricia is the reference size for the typical woman skier: 5’6” and perfectly built, she gets to try most everything.

Now, what are the differences between women's skis and what should you look for? First, some skis have no male counterpart, such as the Head Joy collection, which was designed from the ground up for women. These light and nimble skis not only have their own constructions, but they also have their own molds that Head uses nowhere else.

K2 was one of the first manufacturers to heavily promote women's skis way back when with the LTP in the 1980s, the T9 series around the turn of the century, and eventually the Luv collection (twice), which many feel is the reference series of the ski industry. The current Luvs share molds with their unisex brothers, the Iconics and Pinnacles, but their constructions are significantly different.

Rossignol's freeride skis are basically the same except for graphics and a "W" added to the name. That's all just fine, but I do have an issue when a manufacturer thinks the consumer isn’t paying attention. The Rossignol Sky 7 for men is a 164; for women, it is a 162. Yet not only is it the same ski, it is exactly the same length; does Rossignol assume that a man cannot ski a 162 or a woman cannot ski a 164? Is it marketing? Either way, there is no reason the same ski shouldn't be described the same. The Experience (men) and Temptation (women) lines are mostly the same except for graphics and a slight difference in construction: the women's collection does not incorporate the HD construction.

Some manufacturers, such as Kästle, don’t even offer women's skis, and that's not bad either. Kästle feels a skier is just that, a skier, neither male nor female.

None of these methods of design is absolutely right -- or wrong -- but it is nice going into the buying process with a bit of education. In many cases, women have a choice of graphics, either specific for women or simply unisex. What it comes down to is that just because you are a woman doesn’t mean you are limited to a women’s ski, or that you really even need one. So when shopping, examine each ski, take a look at the men's counterpart, and figure out if they are the same or different and if so, the ways they are different. Ask questions, and if you don't feel you received a satisfactory answer, please feel free to ask here. We will either validate what the salesperson is telling you or maybe provide a different opinion, based on what our testers have actually experienced*

Because 4'13 1/2" is fun-erer.
If you want Pugski.com stickers, contact us!​
Is someone willing to explain why a lower center of gravity body-type might favor a forward mount point?
Is it a "body length = leverage" thing, in which case low CG is a polite way of describing a short person?
You're on the right track. Lower Center of Gravity is one factor, but it's not all about being short. It could be someone who is more pear shaped.
There are women(actually skiers) who are similar weights but different heights, and vice versa. That combined with body shape, factor into a desired mount point, ski length.
Point your skis where you want to go.
If that doesn't work, go where they're pointed.
Bob Barnes
​

Tricia said:
You're on the right track. Lower Center of Gravity is one factor, but it's not all about being short. It could be someone who is more pear shaped.
There are women(actually skiers) who are similar weights but different heights, and vice versa. That combined with body shape, factor into a desired mount point, ski length.
Click to expand...

I've always considered the "pear-shaped" population to be at a bit of an ADVANTAGE when it comes to gravity sports such as skiing and snowboarding. Maybe you, or someone could evaluate and correct the following 2 assumptions that I have with regard to ski mount points. The following generalizations are based on a skiing environment where a skier is attempting to make clean, carved turns in a non-"freestyle influenced" fashion.

If I'm setting up a family member on a ski that is WAY too much ski(length/flex pattern); sure, I'm tempted to move their binding position forward. Likewise, I can make an obscenely small ski feel tolerable by moving bindings rearward. What I am hoping to better understand is, why a female skier who is purchasing a NEW pair a skis, presumably of the ideal proportion for their body type and ability, would be "forced" to select from only forward mount-point skis with some brands. Again, I am not criticizing the concept. I am trying to better understand the theory behind it.

Delicious said:
I am trying to better understand the theory behind it.
Click to expand...

Start at the boot. None of these ski parameters should be considered without hammering down the assumptions one is making about how the skier is going to be balanced in the boot.

If I'm setting up a family member on a ski that is WAY too much ski(length/flex pattern); sure, I'm tempted to move their binding position forward.
Click to expand...

works to a point with relatively upright boots and significantly tapered skis.

On a less strongly tapered ski, if you try it with a boot with significant forward lean and a strong cuff/spine, the tail behavior starts driving the ski, by demanding cleaner, longer release of the previous turn.
OK. So I'm going with shorter cuff + shorter skier = less leverage.

I still don't understand why the ski's flex can't just be manufactured to accommodate the intended customer using a traditional mount point, but I can move on. Thank you for entertaining my spew.

I still don't understand why the ski's flex can't just be manufactured to accommodate the intended customer using a traditional mount point, but I can move on. Thank you for entertaining my spew.
Click to expand...

This is a good discussion and you're probably not the only person who is thinking about it.
Some skis do have scaled sizing and flex as they get shorter.
That's why a Kore 93 isn't 93mm under foot at a 163 length. Its more like 87mm.
Thats why a shorter ski from another manufacturer may be a little softer.

I believe that the mount point on a contemporary ski is more about the shape and flex of the ski than it is about the length.
A forward mount is more important for someone on a park (freestyle) ski and was far more vital on straight skis.
Hope this helps.
Point your skis where you want to go.
If that doesn't work, go where they're pointed.
Bob Barnes
​
In the 60's we had the first adjustable toe piece (LOOK) for the French Team and for the first magazine ski testing program at Mammoth Mountain, with Doug Pfeiffer who was then the editor of SKIING. We discovered how the ski response was so intimately elated to the location
of the toe unit. Since then and today there are numerous brands of adjustable binding systems.
It started with the German ESS bindings where the toe units could be moved togeter an heel was floating. Atomic bought the company and now there seem to dozen of variations and weights.
So if you wish to discover how binding repositioning works choose one of many adjustable positioning systems available. It also does depend considerably on your "Feet in Boots" and which model. I have worked with numerous ladies with assorted lower leg lengths and how much you boot and liner can change your forward lean angle ... especially when not balanced with you knees and weight balanced comfrtably in the center of your foot.
@Sven Coomer Welcome to Pugski. Glad to have you here.
I think you'll find a fair amount of discussion about products you've had a personal hand in developing.
Countless Zip Fit liners to start.
Point your skis where you want to go.
If that doesn't work, go where they're pointed.
Bob Barnes
​
A fun demonstration that used to be at the Ontario Science Center was to show that women have a lower center of gravity. The demo works like this:
95%+ of women can do this, lower center of gravity (ie hips)

Its should be noted that this difference is not massive but just enough to change the location slightly.

Manufacturers that specifically design for the slight differences in forces applied by women, good for them as it caters to the general public that are not intending to work to accommodate the differences in man/women body.

The skis that are unisex, while good all around are not great at either end.

For the rest that don’t care and want the top ski (designed for men, maybe unfairly so

) its great to see that it is really the skier (gender differences be dammed) and not the ski!

Personally I see it I see the gender differences as Powder Skis vs Race Skis vs Park Skis.

.
You must log in or register to reply here.