No better way to kick off the New Year than a visit to Loon for our NH Talls & Smalls Adventure! Loon is located in the town of Lincoln and surrounded by the Pemigewasset Wilderness. The ski area expands across three peaks, and include three base lodges, one mid-mountain lodge, a summit café, and expansive lodging options such as the Loon Mountain Club, Riverwalk, slope-side housing, and a plethora of condos throughout town. View from the summit of South Peak. Note how the Town of Lincoln appears nestled in the valley surrounded by the White Mountains.

Weather today was overcast with light snow flurries, temps around 35 degrees. I was very excited to discover that Loon’s holidays do not include a blackout date for January 1st, so we used the passes we received from membership to support The Friends of Tuckerman’s Ravine https://www.friendsoftuckermanravine.org/new_member_special_offer. There were 49/69 trails open and 10/11 lifts, including my favorite area South Peak. We parked at South Peak and booted up inside the Pemi Base Lodge. Crowds were rather thin for first chair as I think many were recovering from last call on New Year’s Eve. We skied Cruiser, Twitcher, Jobber, Boom Run, and my favorite Ripsaw on South Peak. Snow was smooth, well groomed, and Ripsaw was flawless without ice on the headwall! View from Boom Run looking at the Lincoln Express Quad and Pemigewasset Base Camp. Note the lack of crowds, picture taken around 11am. Me skiing down the headwall on Ripsaw

We decided to travel the Tote Road Quad over to Loon Peak just before noon. The weather on Loon Peak was night and day from South Peak. Flurries turned to sleet like rain and visibility was poor. We made a few runs on Speakeasy, Blue Ox, and Rampasture before moving over to North Peak. Lines at the Kanc Quad were a bit longer than the lines over at South Peak but not ridiculous. On North Peak the weather was worse: freezing rain and zero visibility as my goggles were completely glazed over with ice. They were blowing snow on Upper Walking Boss so we skied down Flume to the Camp III lodge. After a quick de-icing we worked our way down Brookway to the Octagon Lodge and a warm up inside the Paul Bunyan Room. And here is were we found the masses…. The place was hopping! Fireplace in the Paul Bunyan Room at the Octagon Base Lodge We took the gondola back up to Loon Peak, then the Tote Road Quad over to South Peak, hoping to emerge back to pleasant snow flurries and lightly overcast skies. That didn’t happen…. freezing ice here now too. We did a few more runs before calling it a day & hitting up the Waffle Cabin. Best ski food ever! Love me some Waffle Cabin

Overall impression: Loon is one of my most favorite mountains with a large variety of terrain for all skier levels. When Tim & I began skiing together as a couple, Loon was our first big mountain visit and nostalgia plays a big part in my favoritism, but more honestly Loon just skis amazingly well. I have never once had a bad ski day at Loon, and despite the reputation for large crowds…. If one knows how to ski strategically and work their way across three peaks crowds can be avoided. Loon spares no expense when it comes to snowmaking, guest accommodations, and a high scale resort like environment. I think Loon offers both premium skiing and a premium atmosphere all nestled into my favorite place in the whole world, home in Lincoln NH!

Bonus Fun Stuff: Logging history is abundant at Loon and there is a restored stream powered locomotive that transports skiers between the Octagon and Governor Adams base lodges. Trail names such as Can’t Dog, Boom Run, and Picaroon are steeped in logging history, very fitting considering the majority of Loon Peak and the surrounding wilderness was clear cut back in the late 1800’s. Loon is located in the bottom left corner and labeled as Loon Mountain. You can also see markers for North and South Peaks.

Lincoln originated as a logging town (history can be found in article #7 the Kanc) and with a decline in the lumbering industry, residents looked towards recreation, tourism, and conservation as a means of sustainability. Resident Sherman Adams, former Governor of NH and Chief of Staff for President Eisenhower advocated to build a ski area in the heart of Lincoln. Around this time Interstate 93 was being constructed, as were expansions to the Kancamagus Highway. Knowing that access was key, he secured the prominent location of Exit 32 off of the interstate. Prior to politics Adams was a veteran of the logging industry, working as the “Walking Boss” overseeing logging camps along the East Branch of the Pemigewasset River. Post retirement, Adams returned to his lumberjack roots in 1966 and worked hands on with a crew to clear trails for Loons development. Fascinating read inside Loon Magazine can be found here: https://issuu.com/loonmagazine/docs/loonmag1617_web When Loon Mountain first opened to the public on December 27, 1966, the up-and-coming resort had just two lifts, 12 trails, and one toilet. “We began because we had to, not because we were ready,” …

Scottish history is also very prominent at Loon. The New Hampshire Gathering of the Scottish Clans hosts a huge three-day event at Loon Mountain in September, transforming the White Mountains into the Highlands. Words cannot express how eerily cool it is to hear bagpipes echoing throughout the valley. Regardless of ancestry, kilts are always welcome, even the local police department has a designated tartan. Heavy athletics including the caber toss are located on the “lawn” by the Governor Adams Lodge, AKA the junction of Lower NorthStar, Coolidge Street, and Lower Rumrunner https://nhscot.org/festival/heavy-athletics Yes, Sheep enjoy the slopes at Loon as much as us skiers do!

That is a great report!

My BF and I have just returned from Loon Mountain. Put my Ikon pass and its friends and family discount options to a good use!

Life in the Lincoln town seems all to be revolving around skiing. Initially, we were not sure where to stay, and decided to just drive along and see what we find. Finally we have booked The Inn of Lincoln which we had some trouble finding later in the night We seemed to be ones of the few guests in that large place, and many of the places around were seemingly almost empty. Later we found out that the town has about 14000 places for accommodation.

The Loon looks like a nice skiing hill with gentle groomed slopes. Lots of people in the lift lines though:

The South peak where you have to ride another chair was less crowdy, especially in the morning. For our 2nd day, we wanted to drive to that place and park there. We missed their parking spot however, and were directed by Saturday traffic marshals to some other large parking place where skiers were boarding a shuttle bus. A very cute one, with ski pockets outside: 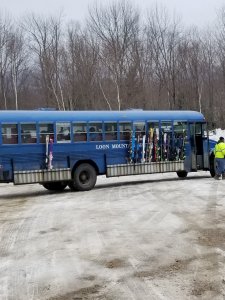 The views of the mountain from the Loon hills are really majestic!
Hi Lilia, thank you for your kind comments! I am so happy to read that you enjoyed your visit to Loon. The blue buses are awesome, they run these through the town during ski season, and during special events such as the Highland games & Brew Fest in the off season. Hope you return to visit!
You must log in or register to reply here.